Home of the Tangmere Pilots

Home of the Tangmere Pilots

Prangster is the Resident Expert on Battle of Stalingrad mission designing and building. He will impart his great wisdom within the hallowed halls of this room.

OK I'll be uploading coop missions as I create them. This will provide a resource to anyone who wants to run a coop mission.

Running coops
First make sure the required ports on your router are forwarded to your computers IP address.
These are:
UPD 28000
TCP 28000
UPD/TCP 28100
Some routers such as mine open the TCP and UPD at the same time.

Stalingrad. 26 December 1942.
The Luftwaffe continues to fly supplies to the Sixth Army within the Stalingrad kessel but with increasing losses due to Soviet fighters. Today’s low cloud and snow should allow some of the Ju52 transports to make it through the enemies’ aerial blockade and land their desperately needed supplies at Pitomnik.

Germans
5 x Bf109G2, 3 x Ju52
Ju52s will AIRSTART near the Kessel and land at Pitomnik. Park-up and unload supplies using your canopy opening key then your bomb drop key.
Bf109s of the Pitomnik airfield defence staffel will take-off and defend the transports.

North Africa. April 1943.
Axis forces are withdrawing to the north.

USAAF
4 x Spitfire V, 2 x P-39, 4 x A20
The USAAF is operating from captured bases near the frontline. Medium bombers will attack retreating enemy columns escorted by P-39s. Lend-Lease Spitfires will gain air superiority over the target.
Briefing on your mission objective will appear after you spawn.
Last edited by Prangster on Thu Mar 29, 2018 6:12 pm, edited 1 time in total.
F/Sgt. Prangster
Green 2, No.601 Sqn 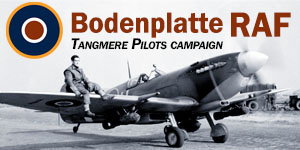 Super
In selecting the motto... 'all for one and one for all'... I have done so because it expresses what should be the creed to every Fighter Pilot. Never forget that you are an essential cog in the wheel, and if you break or fail it will let down your brother pilots, and the grimness of war allows for no such weakness.

So sad I missed these :Cry
Are we going to have a chance to re-run them at some stage in the future?
Reggie - website and forum dude.

I don't see why not, Reg. It is really easy to host them so all it requires is for sufficient folks to be online and willing. Besides, Prangster wasn't online for the event last night so we should probably run them again for him to enjoy the fruits of his own labour :Thumbup :Thumbup :Thumbup
Top

Yes. For the Tunisia one I was still getting 90 FPS while hosting owing to the empty nature of the map in that quadrant. Slightly less than that on the Pitomnik mission due to the weather but down to about 45 fps when running a Dserver with a pretty empty Kuban map. I honestly think that it's the sea in combination with the detail that kills FPS on that map.
Top

So the days of flying ops at section level could be back for some missions. The fps drop on kuban I think is mostly for VR.
Silk do you see the same drop with a monitor only.
Special recognition - Odious Mission Designer
VVS Rank: Starshina of the 32nd IAD Fighter Aviation Regiment.
RAF Rank: F/Lt Jacko No1 Squadron (JX-J) & No1 Sqd Press Officer
LW Rank: Feldwebel

I don't fly monitor only any more mate, will have to take a look at some point I guess.
Top
Post Reply
12 posts • Page 1 of 1

Users browsing this forum: No registered users and 1 guest